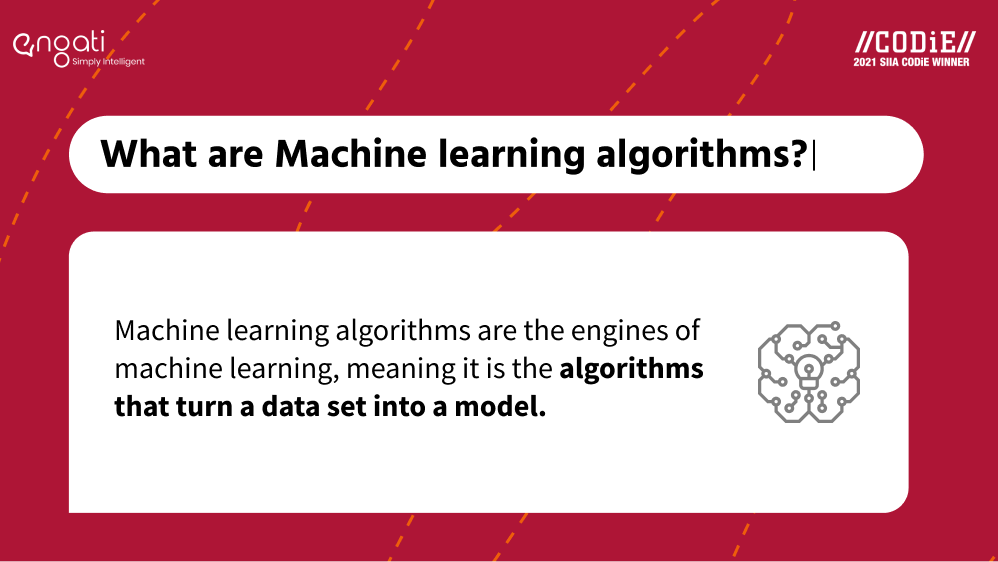 What are machine learning algorithms?

Machine learning algorithms are the engines of machine learning, meaning it is the algorithms that turn a data set into a model. Which kind of algorithm works best (supervised, unsupervised, classification, regression, etc.) depends on the kind of problem you’re solving, the computing resources available, and the nature of the data.

Machine learning algorithms perform pattern recognition. Algorithms learn from data, or are fit on a dataset.

You can think of a machine learning algorithm like any other algorithm in computer science.

For example, some other types of algorithms you might be familiar with include bubble sort for sorting data and best-first for searching.

What are the properties of machine learning algorithms?

As such, machine learning algorithms have a number of properties:

What are the algorithms in machine learning?

Linear regression is a supervised learning algorithm and tries to model the relationship between a continuous target variable and one or more independent variables by fitting a linear equation to the data.

Support Vector Machine (SVM) is a supervised learning algorithm and mostly used for classification tasks but it is also suitable for regression tasks.

Naive bayes assumes that features are independent of each other and there is no correlation between features. However, this is not the case in real life. This naive assumption of features being uncorrelated is the reason why this algorithm is called “naive”.

K-nearest neighbors (kNN) is a supervised learning algorithm that can be used to solve both classification and regression tasks. The main idea behind kNN is that the value or class of a data point is determined by the data points around it.

A decision tree builds upon iteratively asking questions to partition data. The aim of the decision tree algorithm is to increase the predictiveness as much as possible at each partitioning so that the model keeps gaining information about the dataset. Randomly splitting the features does not usually give us valuable insight into the dataset. Splits that increase purity of nodes are more informative. The purity of a node is inversely proportional to the distribution of different classes in that node. The questions to ask are chosen in a way that increases purity or decrease impurity.

Boosting means combining a learning algorithm in series to achieve a strong learner from many sequentially connected weak learners. In case of GBDT, the weak learners are decision trees.

DBSCAN stands for density-based spatial clustering of applications with noise. It is able to find arbitrary shaped clusters and clusters with noise (i.e. outliers).

What are the 3 types of machine learning algorithms?

There is a wide variety of machine learning algorithms that can be grouped in three main categories:

Supervised learning algorithms model the relationship between features (independent variables) and a label (target) given a set of observations. Then the model is used to predict the label of new observations using the features. Depending on the characteristics of target variable, it can be a classification (discrete target variable) or a regression (continuous target variable) task.

Reinforcement learning works based on an action-reward principle. An agent learns to reach a goal by iteratively calculating the reward of its actions. Using this algorithm, the machine is trained to make specific decisions. It works this way: the machine is exposed to an environment where it trains itself continually using trial and error. This machine learns from past experience and tries to capture the best possible knowledge to make accurate business decisions.