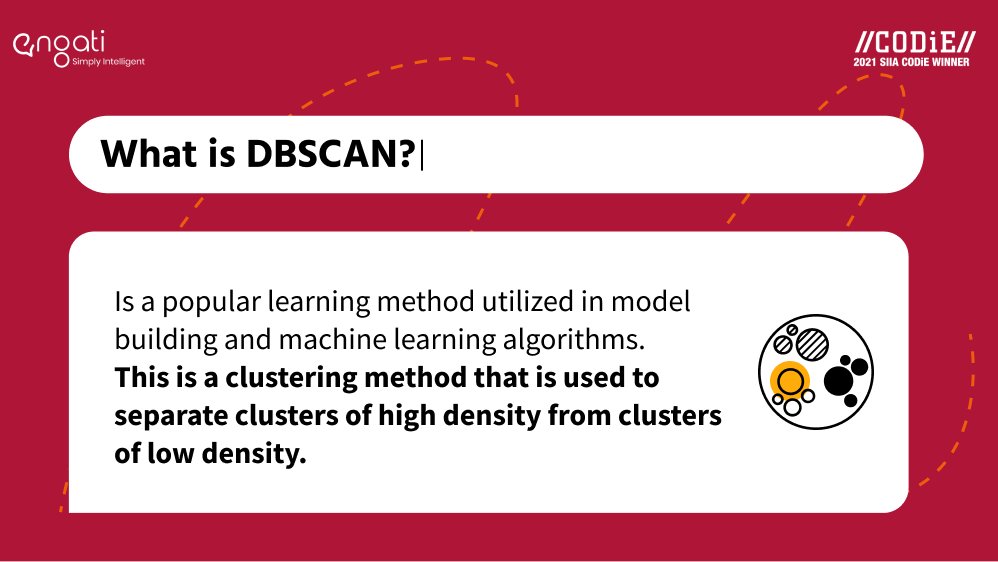 DBSCAN (Density-Based Spatial Clustering of Applications with Noise) is a popular learning method utilized in model building and machine learning algorithms. This is a clustering method that is used in machine learning to separate clusters of high density from clusters of low density. Clustering analysis or simply Clustering is basically an unsupervised learning method that divides the data points into a number of specific batches or groups, such that the data points in the same groups have similar properties and data points in different groups have different properties in some sense.

DBSCAN can sort data into clusters of varying shapes as well, another strong advantage. DBSCAN works as such:

What are the components of DBSCAN?

The parameters of DBSCAN

The main idea behind DBSCAN is that a point belongs to a cluster if it is close to many points from that cluster.

There are two key parameters of DBSCAN:

These parameters can be understood if we explore two concepts called Density Reachability and Density Connectivity.

The points of DBSCAN

Based on these two parameters, points are classified as core point, border point, or outlier:

What are the algorithmic steps of DBSCAN?

Algorithms start by picking a point(one record) x from your dataset at random and assign it to a cluster 1. Then it counts how many points are located within the ε (epsilon) distance from x. If this quantity is greater than or equal to minPoints (n), then considers it as core point, which then pulls out all the ε-neighbours to the same cluster 1.

In the latter case, it will pick another point from the dataset not belonging to any cluster and put it to cluster 2. It will continue like this until all examples either belong to some cluster or are marked as outliers.

If there are at least ‘minPoint’ points within a radius of ‘ε’ to the point then we consider all these points to be part of the same cluster.

What is DBSCAN used for?

DBSCAN is broadly used in many applications such as market research, pattern recognition, data analysis, and image processing. Clustering can also help marketers discover distinct groups in their customer base. And they can characterize their customer groups based on the purchasing patterns. Density-based spatial clustering of applications with noise (DBSCAN) is a well-known data clustering algorithm that is commonly used in data mining and machine learning.

The easier-to-set parameter of DBSCAN is the minPts parameter. Its purpose is to smooth the density estimate, and for many datasets, it can be kept at the default value of minPts = 4 (for two-dimensional data). The advantage of this is great at separating clusters of high density versus clusters of low density within a given dataset and is great with handling outliers within the dataset.

What are the advantages and disadvantages of DBSCAN?

What are the metrics for measuring DBSCAN’s performance?

Inertia measures the internal cluster sum of squares (sum of squares is the sum of all residuals). Inertia is utilized to measure how related clusters are amongst themselves, the lower the inertia score the better.

However, it is important to note that inertia heavily relies on the assumption that the clusters are convex (of spherical shape). DBSCAN does not necessarily divide data into spherical clusters, therefore inertia is not a good metric to use for evaluating DBSCAN models (which is why I did not include inertia in the code above). Inertia is more often used in other clustering methods, such as K-means clustering.