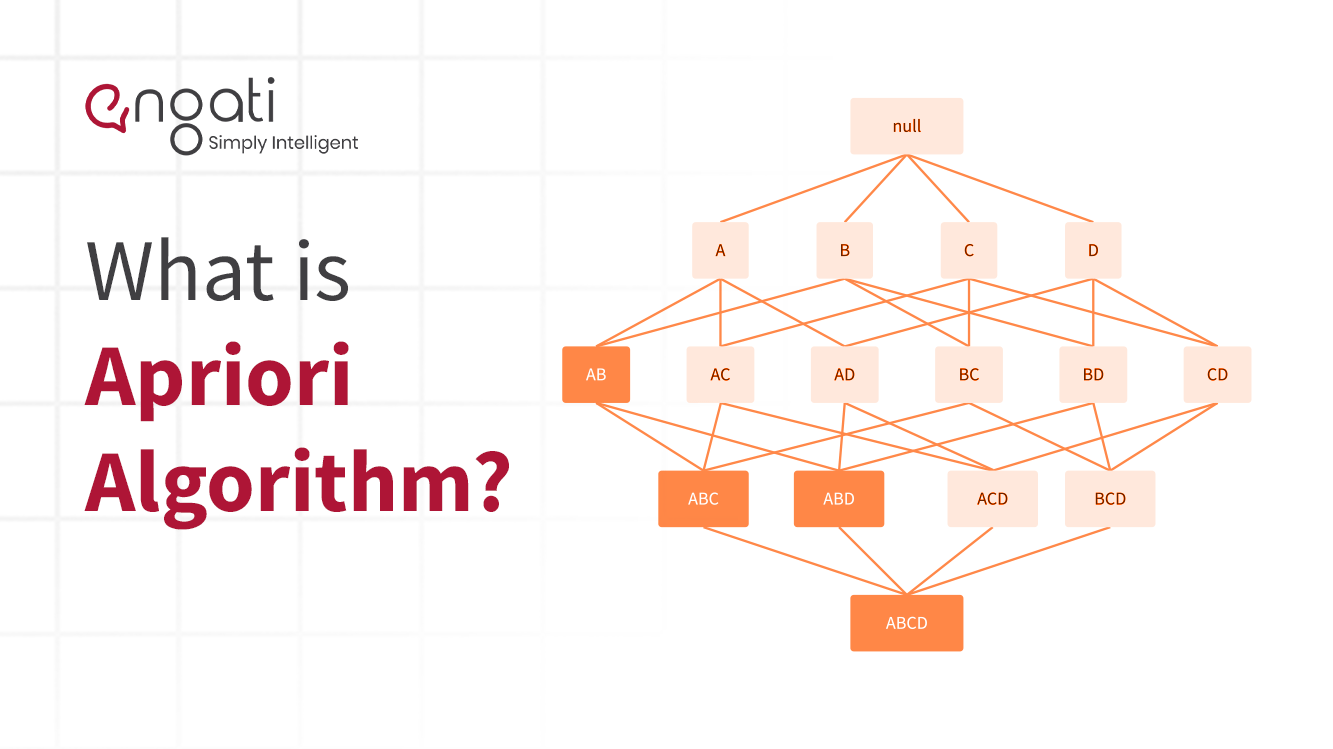 What is Apriori Algorithm?

Apriori uses a "bottom-up" approach, where frequent subsets are extended one item at a time (a step known as candidate generation), and groups of candidates are tested against the data. The algorithm terminates when no further successful extensions are found.

What are the steps of the Apriori Algorithm?

The following are the main steps of the algorithm:

What are the advantages of Apriori Algorithm?

The Apriori algorithm advantages are as follows:

What are the disadvantages of Apriori Algorithm?

One of the biggest limitations of the Apriori Algorithm is that it is slow. This is so because of the bare decided by the:

As an example, if we assume there is a frequent-1 itemset with 10^4 from the set. The Apriori algorithm code needs to generate greater than 10^7 candidates with a 2-length which will then be tested and collected as an accumulation. To detect a size frequent pattern of size 100 (having v1, v2… v100) the algorithm generates 2^100 possible itemsets or candidates which is an example of an application of the Apriori algorithm.

Hence, the yield costs escalate and a lot of time is wasted in candidate generation aka time complexity of the Apriori algorithm. Also, in its attempts to improve the Apriori algorithm to check the many candidate itemsets obtained from the many sets, it scans the database many times using expensive resources. This in turn impacts the algorithm when the system memory is insufficient and there are a large number of frequent transactions. That’s why the algorithm becomes inefficient and slow with large databases.

How can we improve the Apriori Algorithm's efficiency?

Many methods are available for improving the efficiency of the algorithm.

What are the components of the Apriori algorithm?

There are three major components of the Apriori algorithm which are as follows.

For example, you have 5000 customer transactions in a Zara Store. You have to calculate the Support, Confidence, and Lift for two products, and you may say Men's Wear and Women Wears.

It helps find out the ratio of the sales of women's wear when you sell men's wear. The mathematical equation of lift is mentioned below.

What are the applications of Apriori Algorithm?

Apriori Algorithm has picked up a pace in recent years and is used in different industries for data mining and handling.

Some fields where Apriori is used:

Hospitals are generally trashed with data every day and need to retrieve a lot of past data for existing patience. Apriori algorithm help hospitals to manage the database of patients without jinxing it with other patients.

The educational institute can use the Apriori algorithm to store and monitor students' data like age, gender, traits, characteristics, parent's details, etc.

On the same line as the education and medical industry, forestry can also use the Apriori algorithm to store, analyze and manage details of every flora and fauna of the given territory.

Tech firms use the Apriori algorithm to maintain the record of various items of products that are purchased by various customers for recommender systems.

Big data can help mobile e-commerce companies to deliver an easy, convenient and personalized shopping experience. With the Apriori algorithm, the real-time product recommendation accuracy increases, which creates an excellent customer experience and increases sales for the company.

<script type="application/ld+json">
{
"@context": "https://schema.org",
"@type": "FAQPage",
"mainEntity": [{
"@type": "Question",
"name": "What is Apriori Algorithm?",
"acceptedAnswer": {
"@type": "Answer",
"text": "Apriori algorithm is used for frequent item set mining and association rule learning over relational databases. It proceeds by identifying the frequent individual items in the database and extending them to larger and larger item sets as long as those item sets appear sufficiently often in the database."
}
},{
"@type": "Question",
"name": "What are the advantages of the Apriori Algorithm?",
"acceptedAnswer": {
"@type": "Answer",
"text": "1. This is the most simple and easy-to-understand algorithm among association rule learning algorithms.
2. The resulting rules are intuitive and easy to communicate to an end user
3. It doesn't require labeled data as it is fully unsupervised; as a result, you can use it in many different situations because unlabeled data is often more accessible
4. Many extensions were proposed for different use cases based on this implementation—for example, there are association learning algorithms that take into account the ordering of items, their number, and associated times
5. tampsThe algorithm is exhaustive, so it finds all the rules with the specified support and confidence"
}
}]
}
</script>