How does intent and entity work in intelligent business chatbots? 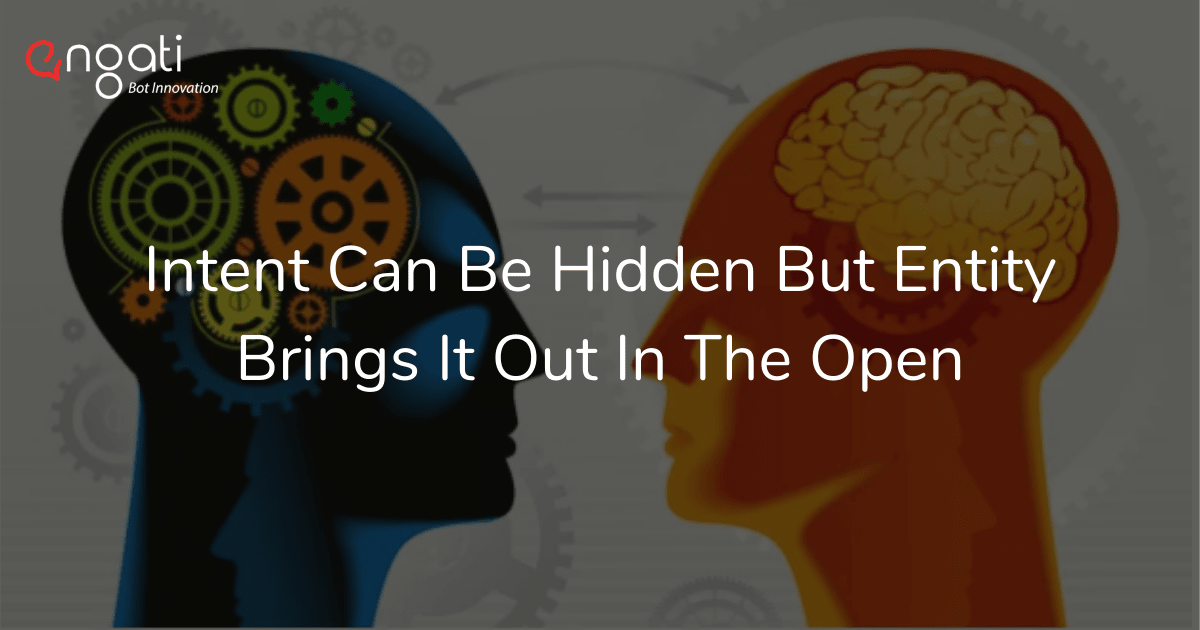 We have come a long way from using computers for simple mathematical operations. Today is the age of automation, and so far, computers have been instrumental in the process of automating just about anything. However, replicating human interactions in a conversation in commercial chatbots has been the biggest challenge.

Intent and context conceptualisation - Is it what makes us stand out as intelligent, sentient beings? What is it that you cannot compute using numbers or equations? That thing which earns you the highest points on a cognitive index? It is the ability to comprehend context, and ask the right questions to drive meaning, even from a vague and barely informative question.

If you aren’t already familiar with commercial chatbots, this is how they work

You feed the commercial chatbot a lengthy set of FAQs covering all the topics that you want it to answer, and you deploy it either on your website or through other channels where customers are more likely to appear with their queries.

Now, here’s where the problem lies, if you were to ask the bot a question slightly out of its curriculum, it would fail tragically, regardless of how good the NLP system behind the bot is.

Let me give you more context that contains some intent

Suppose you own a flower shop, and your website has a chatbot which runs suggestions to your customers based on various questions that they might have, so you have fed the bot with the following FAQs:

Now suppose a customer comes to your website and just asks “What flowers do I buy?”

Based on the NLP system running in the background, it might either show that it does not understand the question or display one of either of the above two results based on a probability score.

Now had there been a human, he would have asked more questions, like “For what occasion?”

Adding the functionality to segregate Intent and Entity in your Chatbot’s FAQs solve this issue and gives the bot the ability to pose smart questions to draw more information from a user, instead of resorting to fallback responses.

“What flowers do I buy for a birthday?”. On looking at this statement, a human would understand two basic things:

These are the Intent and the Entity respectively, and more or less are the building blocks of most queries. Now if you run a gift shop, you might not just be selling flowers; you might be selling gift cards, chocolates, cakes, and much more, and in that case, you would want to juxtapose two or more Entities with the Intent on buying.

After integrating these scenarios into a chatbot, we now open up the possibility of having a more human-like interaction between a Customer and a Bot.

Look at this conversation

Customer:  “I want to buy something”

Bot: “Great! For what occasion?”

Customer: “Yeah! I’ll pick them up in the evening at 8”

In this example, the customer tells the bot his Intent, and the bot keeps asking questions to determine the Entities associated with this Intent, effectively making him place an accurate order.

We are well into the 21st century, and we know that Chatbots are taking over the human side of customer support. But if we are to rely on AI in this matter, we have to give them the ability to function like a human, think and work like humans.

When we do something so natal as being curious to figure out the objects of a question, we do not usually evaluate what inspires our curiosity. We ask questions because it is in our nature, as human beings, to be curious. So we have to dig deep and understand the root of our qualities. And then we have to effectively program bots with the ability to own human attributes. To think and ask questions like our counterparts, so they are more efficient, more accurate, and have the essence of the human species.

Read our blog on Educational Chatbots & Chatbots for Universities & Institutions

Give your commercial chatbots a more personalised human touch. Register with Engati today and start building your chatbot for free!

No items found.
Intent is the objective a user has in mind while interacting with your chatbot. An entity modifies the user's intent and adds value to it. Read how they work.
How does intent and entity work in intelligent business chatbots?

The 5 pillars of responsible and ethical AI

How to optimize your customer service using Machine learning?

A powerful new UX for your Engati chat systems