The history of chatbots: From MIT to your website 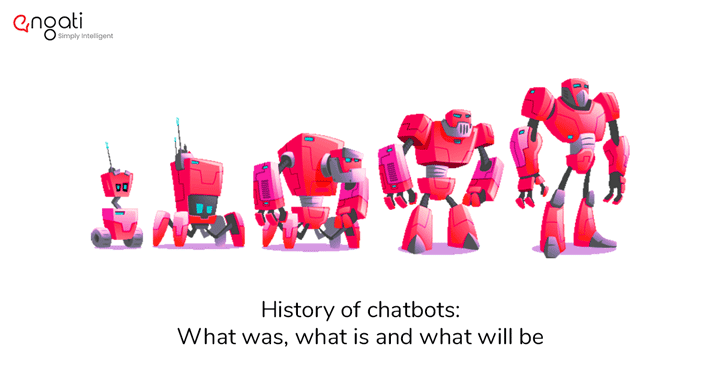 Throughout modern history, we’ve been obsessed with interacting with robots and artificial intelligence. But towards the latter half of the 20th Century, this dream started becoming a reality. Starting with ELIZA in the 1960s to Alexa and beyond. Here’s your very own guide to the history of chatbots.

The year was 1950. Alan Turing, who during World War II was one of the most prominent breakers of German code, issued an open challenge to the computer scientists of the world. It came to be known as the Turing Test. Turing challenged scientists to create a program that would be indistinguishable from a human in a Natural Language conversation.

A panel of human judges would converse anonymously, in text form, with a computer program and also with a human operating a computer. They would try to determine which of the participants is the human and which is the program. This one challenge has been the reason behind the development of thousands of chatbots. It is due to this test that we can chronicle the history of chatbots.

Fast-forward to 1966 and we see Joseph Weizenbaum at the MIT Artificial Intelligence Laboratory and his creation- ELIZA. ELIZA chatbot assumed the persona of a psychotherapist.

She managed this by passing the words entered by users through a program and pairing them with scripted responses. She didn’t manage to pass the Turing Test. But she did manage to do something unexpected. ELIZA got users to trust her enough to even confide some of their deep thoughts in her.

6 years later, psychiatrist Kenneth Colby released PARRY. ELIZA acted as a psychotherapist, PARRY, however, played the role of a patient suffering from paranoid schizophrenia. Colby essentially considered his creation to be,”ELIZA with attitude”.

In a variation of the Turing Test, PARRY shocked its testers. Only about 48% of psychiatrists were able to differentiate between PARRY and an actual paranoid person.

The following year, in January 1973, Vint Cerf decided to bring them head to head. Vint created a ‘computadora e computadora’ situation. With ELIZA at MIT and PARRY at Stanford University, he used ARPANET to make ELIZA give PARRY a psychotherapy session.

This conversation was one of the first milestones in the history of chatbots.

Created in 1988, Jabberwacky attempted to stimulate natural human conversations in an entertaining manner. Created by British programmer Rollo Carpenter, it made use of an AI technique called ‘contextual pattern matching’. It differentiated itself from all previous chatbots which had static databases.

By collecting phrases that human users utilized and adding them to its database, it did something completely new. Rollo wanted Jabberwacky to be more of an entertainer and a companion than an assistant. He aimed to develop artificial intelligence that could beat the Turing Test.

Carpenter envisioned Jabberwacky to be a talking pet of sorts. Almost a decade after he created it, it was released on the internet in 1997. This led to other technological growth. It was even used for academic research purposes.

In 1992, Dr. Sbaitso was created for MS-Dos. It had a fully voice-operated chat program. Dr. Sbaitso was developed to showcase its ability to generate a synthesized voice with sound cards. It simulated a conversation with a psychologist. Since most of the questions it asked were ‘Why do you feel that way?’, it avoided more complicated interactions.

A.L.I.C.E. (Artificial Linguistic Internet Computer Entity) uses heuristic pattern matching to have conversations with humans. It managed to have more human-sounding conversations. This was because it made use of Artificial Intelligence Markup Language (AIML), which let it give more sophisticated responses. Developed in 1995, it served as Spike Jones’ muse for his critically acclaimed film ‘Her’. It wasn’t able to pass the Turing Test. But, A.L.I.C.E. was still the most advanced bot of its time and holds a lot of significance in the history of chatbots.

The advent of the new millennium ushered in a lot of exciting, new chatbots. Evolving from pattern recognition technologies, these chatbots began to showcase machine learning and other advanced algorithms.

Due to this, they were able to learn from their interactions with humans. The history of chatbots took a whole new turn with conversational agents beginning to display a new kind of intelligence.

2001 brought Smarterchild to the world. Smarterchild resided in the AOL IM and MSN Messenger lists of millions of people. It could do anything from holding a conversation to giving you stock quotes and sports scores. Because of these capabilities, this helpful bot was the predecessor to all of the widely available virtual assistants that we know and love.

5 years later, IBM came up with a chatbot that would compete on the TV show ‘Jeopardy!’. WATSON even ended up beating a couple of the show’s former champions. It demonstrated the power and potential that conversational agents hold.

The last decade gave us personal assistants like Siri and Google Now. The world got chatbots that could perform tasks on behalf of their human users. From placing calls to setting reminders, even looking up the web, personal assistant chatbots can do it all. Amazon released Alexa in 2015.

Integrated into their Echo devices, Alexa holds voice interaction capabilities allowing it to perform tasks when prompted by voice commands. However, Alexa’s voice capabilities are far from perfect. Keeping that in mind, we at Engati provide our very own voice integrated chatbots with higher reliability.

Therefore, it has become important for businesses to be able to meet their customers in the place where they prefer to spend their time online.

Engati provides you with an option to deploy your chatbots directly over these platforms. It even lets your customers make purchases directly on these bots, thus reducing the number of steps in the buying process.

Over the past few years, we’ve seen organizations utilize chatbots for all sorts of purposes. From customer service, all the way to healthcare, travel advice, and even e-commerce transactions, they're doing it all.

Movie studios like Disney and Marvel let their fans interact with their characters through the magic of chatbots. H&M allowed its customers to curate outfits with the help of bots.

Even UNICEF roped in such bots to conduct research on social causes. Some of these resulted in projects in collaboration with governments to drive real social change. Because of this, the lives of millions dramatically improved.

Engati can help organizations drive such campaigns with chatbots that operate in multiple languages. This would enable them to work with non-English speaking communities for the first time in the history of chatbots.

The future of chatbots

We cannot narrate the history of chatbots without attempting to predict how it could tie into the future. Here's our take on it.

The future of chatbots lies heavily in Conversational AI (Conversational Artificial Intelligence). Now, users want bots that can understand their questions and commands based on previous interactions that they engaged in. Millennials and Gen Z are becoming more socially conscious.

With Gen Z dealing with more mental health, body image and loneliness issues than all the other age groups so far, users would like to have chatbots that can gauge their emotional state based on conversational context and respond in an appropriate and sensitive manner.

Chatbots are simplifying & streamlining processes for millions of businesses across the world today. With the global business scenario becoming increasingly competitive, organizations are looking to increase their efficiency as much as possible. After all, why should organizations waste their resources, especially their employees’ time and energy on answering simple and repetitive questions.

These could very easily be handled by a simple chatbot! In fact, Oracle surveyed over 800 decision-makers from organizations spread across France, the Netherlands, South Africa and the United Kingdom. 80% of the respondents said that they either already used chatbots, or planned to do so by 2020. With Engati’s different plans, you can get a chatbot for your business, regardless of your budget.

AI Chatbots are evolving at a much faster pace. Hence, they can handle a much larger repertoire of commands and queries. Today, they can accomplish much more complicated tasks and comprehend queries that are more vague in nature.

The chatbots of the future will be able to prioritize requests.

They'll be able to decide which ones can be handled by the bot and which requests need an actual human executive. Therefore, the customer experience will become smoother than ever before.

Now, the employees can focus on more important tasks, while the customers will have greater satisfaction. Customer service is an expensive activity and chatbots can reduce these costs by up to 30%. They do that while simultaneously improving the customer experience.

Chatbots are here to stay. In fact, they'll become an integral part of our lives.  In time, we may develop chatbots having Emotional Intelligence.

It’s clear that bots are becoming more human-like. Soon, we may have chatbots that could actually pass the Turing Test that started it all.

Stick around for further updates and information on chatbots.

While you’re at it, register to build your chatbot with Engati.

If you register with us right now, you can get started with Engati’s customer engagement platform with unlimited live chat agents, free for 30 days! Click the get started button now!

How to create your own Telegram chatbot

How data and AI have evolved chatbots