The 7 most innovative chatbot usecases from across the world 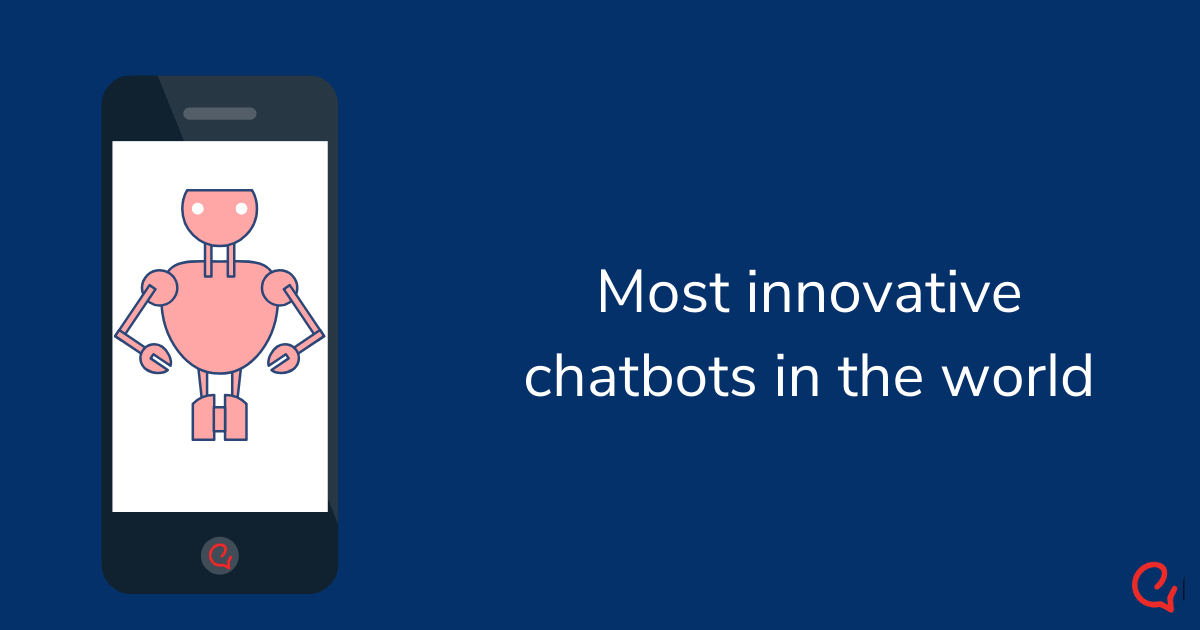 Chatbots have become extraordinarily popular in recent years. Love them or hate them- chatbots are here to stay! In the business aspect, chatbot innovation or innovative chatbots are extremely helpful in creating a strong brand image and provide the best possible customer service. Thanks to advances in technology and machine learning, chatbots have become more advanced and can do so much more than just automating mundane tasks. As time goes on, chatbots will continue to evolve, and eventually perform a central role in all different types of companies.

As more and more companies start using chatbot services, their use-cases have grown to a larger extent and are being used creatively around the world.

In this post, we’ll be taking a look at 7 most innovative chatbots built and being used by companies and organisations around the world!

Dementia is an overall term for diseases and conditions characterized by a decline in memory, language, problem-solving and other thinking skills that affect a person's ability to perform everyday activities. Memory loss is an example. Alzheimer's is the most common cause of dementia. About 50 million people suffer from Dementia today, so imagine a mass of about 50 million people struggling with daily interactions and their overall conversational abilities, which only worsens as the illness progresses. The shame and frustration that many dementia sufferers experience often make routine, everyday talks with even close family members challenging. That’s why Russian technology company Endurance developed its companion chatbot.

As mentioned above, many people with Alzheimer’s disease struggle with short-term memory loss. Therefore, the chatbot aims to identify deviations in conversations that may indicate a problem with immediate recollection. In addition, since the chatbot is a cloud-based solution, doctors and family members can review communication data collected in the bot to identify potential degradation of memory function and communicative issues that could signify deterioration of the patient’s condition.

Though the project is still in its early stages, it still has great potential to help scientists, doctors, and other care teams to understand better how Alzheimer’s disease can affect the brain. The conversational agent is currently an open-source project, meaning that anyone can contribute to the development of the bot’s codebase. A Russian version of the bot is already available, and an English version is expected at some point this year. Endurance bot is one of the classic examples of innovative chatbots.

We have all experienced insomnia at some point in our lives. Those nights when we just can’t get our heads together, overthinking and over worrying while the whole world is resting peacefully, and the obvious worst of all, unable to sleep no matter how hard you try! Hence, Casper’s have come out with Insomnobot 3000, a conversational agent that provides insomniacs, someone, to talk to while the rest of the world rests easy.

3. Disney bot: A detective bot to solve the crimes with fictional characters

Disney, a major media conglomerate Disney uses chatbot technology now to engage younger audiences. Zootopia’s Judy Hopps Facebook Messenger Bot from Disney is a stunning example of next-gen digital experience for children and movie fans in general. Developed by Imperson, a conversational AI startup from Disney’s, the Zootopia bot engaged fans one-on-one with a mystery and detective game based on details from the film. Disney invited fans of the movie to solve crimes with Lieutenant Judy Hopps, the tenacious, long-eared protagonist of the movie. Children could help Lt. Hopps investigate mysteries like those in the movie by interacting with the bot, which explored avenues of inquiry-based on user input. Users can make suggestions for Lt. Hopps’ investigations, to which the chatbot would respond. Interesting enough?

International child advocacy nonprofit, UNICEF- is using chatbot innovation to help people living in developing nations speak out about the needs and requirements of their communities.

‍U-Report is a messaging tool that empowers young people around the world to engage with and speak out on issues that matter to them. The bot focuses on large-scale data gathering via polls. U-Report regularly makes and sends out prepared polls on a range of urgent social issues, and the users, known as “U-Reporters”, can respond with their input. UNICEF then uses this feedback as the basis for potential policy recommendations. U-Report is another good example of innovative chatbots.

U-Report is now active in 60 countries, benefiting 8 million users all over the world everyday! Country U-Reports are run by UNICEF and partners on the ground, including local government, non-governmental organizations and young people themselves. U-Report is available via numerous messaging, social media and SMS channels, and even works on a basic mobile phone. It is free, anonymous and easy to use!

In one particularly obvious example of how this bot has made a major impact, U-Report sent a poll to users in Liberia about whether teachers were forcing students into sex in exchange for better grades. Approximately 86% of the 13,000 Liberian children U-Report polled responded that their teachers were engaged in this despicable practice, which resulted in a collaborative project between UNICEF and Liberia’s Minister of Education to put an end to it.

Have you ever wanted to talk to Einstein about his love life? Who wouldn’t love an opportunity to chat with one of the most iconic scientific minds to ever exist? National Geographic has just made that (kind of) possible with a new Facebook Messenger chatbot promoting their show Genius, a dramatic look at the life of Albert Einstein as he grapples with theoretical physics, relationships, and an increasingly dangerous and hostile political world. Before the show on Albert Einstein aired, for instance, Page visitors who clicked “Send Message” were connected with “Einstein.”

This irreverent bot followed the user’s conversation, replying with information about the show and quips about relativity and other topics Einstein studied and jokes. In addition to making jokes, Einstein bot also answers professional and personal questions. Today, the bot has generated stellar engagement, including 6 to 8-minute average conversations, 11 turns per conversation, 50% user re-engagement, and an involved community of followers. Like most great chatbots, it created the feeling of a one-to-one conversation, connecting the brand and consumer in a more intimate way.

Visual Dialog is a visual chatbot that can interpret images. The chatbot is based on computer vision and neural network technologies. Users can upload images directly through the chatbot. The Visual Dialog chatbot will send a message describing what’s in the picture. Playing around with Visual Dialog can be very entertaining and addictive, given the images are attractive and can grasp attention. Image recognition features are sometimes used in e-commerce chatbots as well. Visual chatbots from popular brands, such as Nike, can use pictures taken with your smartphone to find products and even offer customization options.

Imagine that your favorite magazine is able to send you articles that will probably be interesting for you to read. Day after day to your morning coffee, you have a list of the most interesting articles on your phone, so that you don’t have to go through a magazine by yourself. It’s like a personal assistant!

These are some of the interesting bots that we could find online built by second-party establishments around the world. We're keeping up as well, by making innovative chatbot templates ourselves that can be of some good, procuring to a wide range of innovative use-cases.

As you can see, innovative chatbots can meet many customer needs. What is more, this solution works in a lot of different industries. However, all of these chatbots have one thing in common – they help and engage. All in all, these definitely are one of the more innovative uses of chatbot technology, and the ones we’re likely to see more of in the coming years.

To build a bot for yourself, visit Engati and choose through 200+ cool and bot templates as mentioned above, at our Chatbot Marketplace!

Don't forget to register with us to begin your journey towards building innovative chatbots for yourself!

No items found.
Organizations are using chatbots for everything from customer support to COVID-19 awareness campaigns. Here are some of the most innovative use-cases globally.
The 7 most innovative chatbot usecases from across the world

How to create your own Telegram chatbot

How data and AI have evolved chatbots