The emotional trigger that influences your customers' minds 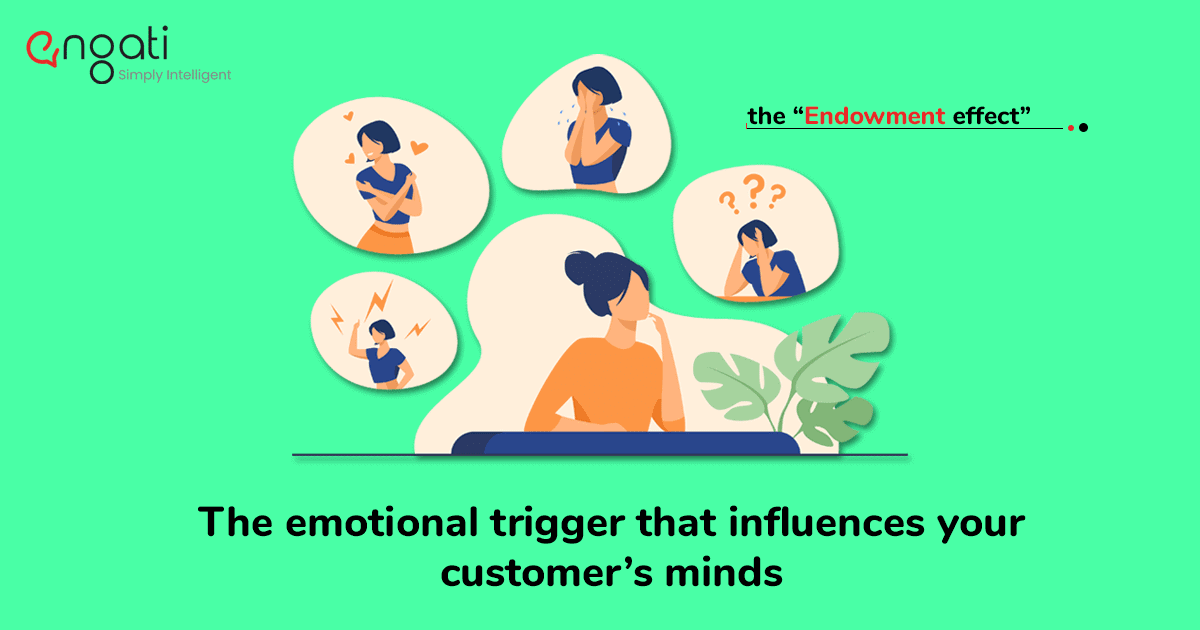 We have a mirror that has been resting against the wall in our garage for the last five years. I want to give it away, but my wife Lorraine keeps saying, “No, we’ll sell that. It’s a nice mirror.”

It is a lovely mirror. But we aren’t going to get that much for it. Still, there it sits.

The Endowment Effect can significantly affect your customer-driven growth on both sides of the customer and brand equation.

In the case of the mirror, Lorraine has an elevated sense of worth of the item. Because it was a “nice” mirror (read: expensive), and she likes it and remembers how she liked how it looked in her home, she values it highly and pictures the mirror bringing in a significantly higher price than it probably will.

Before you judge her too harshly for her thinking, reflect on any item you sold at a garage sale or Craigslist and the counteroffers you passed on from interested buyers. Or, if you haven’t sold things in the second-hand market, consider your feelings when the car dealership told you the amount they were willing to give you as a trade-in on your old car. For my part, I have been insulted by these exchanges more than once. The Endowment Effect is at work in all of these valuations. Moreover, it can affect pricing decisions in business, as well.

THE ENDOWMENT EFFECT AFFECTS THE MARKETPLACE

In Academic circles, the Endowment Effect violates a significant long-held economic theory. Specifically, the Endowment Effect conflicts with the Coase Theorem, attributed to Nobel Prize-winning economist Ronald Coase. To summarize the Coase Theorem, it is that it doesn’t matter how we distribute things in a marketplace, as long as people can buy and sell, then it should all work out. People who value an item most should end up with it because they’ll be willing to pay the most for it. People who have something that they value less should sell it. The market will determine the price, and the items will work their way to the appropriate owners.

People who value an item most should end up with it because they’ll be willing to pay the most for it. People who have something that they value less should sell it.

However, Nobel-Prize Winning Economist Professor Richard Thaler from the University of Chicago and his colleagues were less sure of it in practice. So, they tested it by creating an artificial market. They gave half of the students at Cornell University a Cornell University mug and half of them a Swiss chocolate bar. Then they created a market. They said, “So if you have a mug but want a chocolate bar, you can trade it to somebody else in the class. If you don’t have a mug but want one, you can trade it with somebody else in the class.”

Now, the Coase Theorem says that, on average, you should expect about half the mugs to change hands. Some people would love a mug. Some people don’t care about mugs. And some of the people who want a mug didn’t get one. Coase theorem dictates that we should be able to reach a “clearing price” (or, in this case, a trade) where everybody’s happy at the end of the day.

However, this moment is where the Endowment Effect comes into play. People who have the mugs value them much more and were unwilling to trade them for a chocolate bar. Interestingly, the opposite was true also. People with chocolate bars were not willing to trade for the mugs. This experiment reinforces this idea that once something is in your possession, you value it a lot more, and it requires more for you to give it up.

(To read more about the Endowment Effect and other interesting concepts in Behavioral Economics, we recommend you read Nudge by Thaler and his collaborator Cass R. Sunstein.)

The Endowment Effect is one of the significant demonstrations or implications of Loss Aversion. Loss Aversion is the idea that losing something is more painful than getting something of the same value. So, in the Cornell University example, the students who “own” a mug feel that giving it up is painful.

The Endowment Effect happens in many experiences. For example, free trials contribute to the Endowment Effect. Once you use a product or service, you often want to keep it because it ties into Loss Aversion. You feel like you are now giving something up. An excellent example of this in action is the Sirius Satellite radio free trials in a new car. You might not have ever signed up for it, but once you have driven your new car and get used to it, it is difficult to give it up (and many people don’t).

So how do we measure these losses we feel? Well, it depends on how we categorize them mentally. A significant part of Loss Aversion is that it is emotional; losses feel painful. The Endowment Effect is also a product of our feelings of ownership; ownership feels good. When we no longer have something we had, it feels like a loss, meaning it feels painful. Plus, we no longer feel the good feelings of ownership, which makes it even worse. These emotions are valuable resources for explaining customer behavior. We measure these losses in the way they make us feel—and will often do things as customers to avoid these bad feelings.

OWNERSHIP ISN’T EVERYTHING ALL THE TIME

Where I live in Florida, I belong to the Freedom Boat Club, which is a subscription service for boats. You pay the subscription, and then you can choose a boat from their fleet when you want to go out on the water. The service is excellent for us because we don’t have to maintain the vessel then, but we still have access to one whenever we feel like it.

However, there’s always part of me that would still like to own a boat. It isn’t rational; it’s emotional. That said, I also like not having to deal with the boat I own, which is also emotional. Not dealing with owning a boat wins in this contest, even if I still have pangs of longing for being a captain of my boat.

My feelings about the Freedom Boat Club make another important point about the Endowment Effect and Loss Aversion. To understand the effects of either, it is also essential to know what people really want. The Endowment Effect won’t work to your favor if nobody sees value in “owning” your offer, nor will Loss Aversion help you if nobody cares that they lost what you had given them.

WE FEEL LOSSES ABOUT INTANGIBLE ITEMS, TOO

We see interesting influences from the Endowment Effect and Loss Aversion on client behavior, too. When we do journey mapping in our business-growth consultancy to redesign an experience, many people at the organization are involved. We have a brown piece of paper for each of the stages of the customer journey as part of the map. People share ideas here about what the problem is or how to solve it, and so on.

A group like this can generate so many ideas. We get 500 in some cases, ranging from big ideas to small ones. We have to use a rational process to decide which ideas to employ. We ask things like, how much will it improve the experience or how much revenue will you gain from it? What’s the cost? What’s the timescale? The usual things, as it were.

People are keenly interested to see whether their ideas get through the process, and feel upset when we eliminate their plan.

One thing I have noticed in journey mapping is how people are keenly interested to see whether their ideas get through the process, and feel upset when we eliminate their plan. That is the Endowment Effect and Loss Aversion at work. First, you see that because the idea is yours, you value it more (Endowment Effect). Second, while gaining praise for your plan feels good, losing the possibility of your belief that you’ve become attached to being chosen feels much more painful than the recognition felt good.

SO, WHAT DOES THIS MEAN TO YOUR CUSTOMER-DRIVEN GROWTH?

The idea of ownership is powerful. We have a few suggestions for how to use it strategically:

From a practical Customer Experience perspective, we would recommend you use the free trial method to attract new customer-driven growth. When you give potential customers the chance to feel ownership of your goods or services, they begin to value them, and it becomes more challenging to give them up. Loss Aversion comes into play, which only further enhances the Endowment Effect they feel toward your offering and solidifies their resolve to retain your goods or services.

However, these concepts work the other way, too. If you have a subscription service, like the Freedom Boat Club, you also need to overcome emotional responses. People feel a longing to own something; you need to appeal to their rational side with the benefits of not owning. In this case, appealing to your customers’ reason or addressing a significant pain point of ownership that your product or service overcomes is the best strategy.

Recognize also that you have these effects working in your relationship with ownership also.

If you feel a strong sense of value in your product or service, you are likely to overprice. This tendency is real in retail situations and even at a personal level with salary or hourly rates.

To respond to the effects of these Behavioral Economic principles, we recommend understanding the reliable emotional drivers surrounding ownership and even extending beyond the strict Endowment Effect derivatives. Also, it is crucial to realize that with some time and distance, these emotions cool. The Endowment Effect fades with time.

Unless they are for a mirror. Those feelings of ownership never, ever fade.

Create amazing experiences for your customers with the powerful combination of automation and live chat. Try Engati for free today.

Colin Shaw is the founder and CEO of Beyond Philosophy, one of the world’s leading Customer experience consultancy & training organizations. Colin is an international author of six bestselling books and an engaging keynote speaker.

He has also been voted twice as Brand Quarterly readers on one of the 'top 50 Marketing Thought Leaders Over 50' and has been established as one of the top ‘Customer Service Gurus’ in the world by a Global Guru poll.

Colin has even been interviewed by us on the Engati CX show and was a panelist on our Titans of CX webinar. This article was originally published on the Beyond Philosophy blog.

Our interview with Colin Shaw

8 secrets for influencing your customer perception

Why customer appreciation is important

Track these KPIs to empower your customer support teams

4 ways to create experiences that customers will talk about