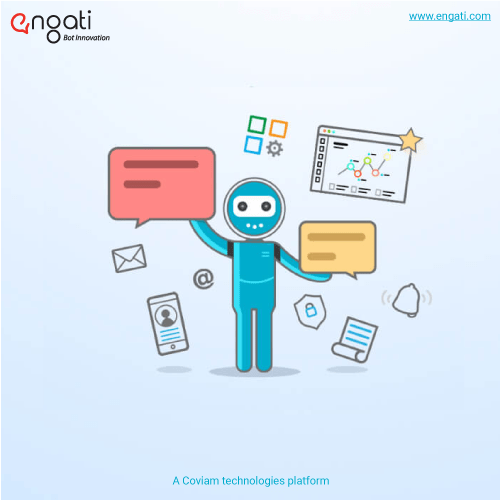 While there can be many ways to assess the intelligence level of a chatbot, one of the most critical aspects is the ability to carry out contextual, engaging, and comprehensible conversations with humans.

Employing Natural Language technology to build a conversational quotient, an intelligence in chatbots is at the forefront of research and companies are pouring billions of dollars to come up with ways to do that.

In this article, we will explore three such technologies

This is the most well-known of the above three technologies. It deals with processing text messages sent by a user, breaking them into parts, adding grammatical elements, and identifying interesting items.

The following are some of the common processing elements in NLP:

So, a model trained with Wikipedia articles vs trained with twitter messages will give different results. Depending on the type of problem that needs to be solved using NLP, an appropriate training data set can be identified for training a model or a pre-trained model that uses a similar dataset must be identified. Also, a model trained in English text cannot be used for processing other complex character language text. The model is specific to the language on which it has been trained.

Some of the prominent tools for NLP include Spacy, Stanford NLP, and NLTK.

Put simply NLU means the ability of the computer to comprehend language and falls into the area of machine comprehension. Just like a human can read a message, interpret it, understand its meaning, context, and intent, the ability of a machine to be able to do the same is the goal.

NLU is an AI-hard problem – meaning solving it could give true artificial general intelligence to machines.

With respect to a chatbot, one of the key NLU problems is the ability to determine the ‘intent’ of a user’s message. We otherwise refer to this as intent classification.

Let’s take an example. Say a user sends the following message to a chatbot:

‘I want to travel from London to New York’

A chatbot with NLU would be able to determine this as a ‘booking intent’ i.e. the user wants to make a booking.  It should also determine that this user typically travels from London to New York via flight and narrow down the intent to a ‘flight booking intent’.

If the user would have typed ‘I want to go to New York,' the chatbot would have still determined the intent as ‘flight booking intent’ and additionally got the user’s current location as London. This is a true understanding of the meaning of a message and usage of contextual information to get a deeper meaning. More like, for bringing out the conversational quotient.

NLU is achieved by using a machine learning classification algorithm, tons of training data consisting of the user messages and the correct intents, and building a model that can accurately classify the user’s intent. We should also train the model to handle variations of messages having the same intent to handle ambiguous sentences.

We can make use of tools such as Rasa NLU to easily develop NLU for a chatbot to focus on the conversational quotient.

The challenge with human language is that it will not conform to a pre-defined format or script. At different points in time, the same human may type different messages for the same intent. Plus, many times humans are abstract and ambiguous in conversations. How does the chatbot handle such situations?

A chatbot possessing NLG ability would mean that the chatbot knows what exact and clear response (message) to generate for a corresponding user message.

In the above example, for the message ‘I want to travel from London to New York’, the chatbot would have to understand that for booking a flight we also need the date and time of the travel and thus ask the user for a specific date of travel, time of travel, return journey, etc.

However, if the user had already provided this information then the chatbot should not ask for the same information again.

In the previous case, the chatbot should respond like ‘Thank you, Mr. ABC, for your inquiry. Could you provide the date and time of travel?’

While in the second case it should respond like ‘‘Thank you Mr ABC for your enquiry. Let me check for available flights and get back soon’

If you notice the response must be coherent, meaningful, contextual, complete, non-repetitive, and clear. This mandates that the response cannot be static but must be dynamic.

How does the chatbot figure out what sort of response to generate? One of the ways we solved this is by using a Dialog management system. For different input messages, we can train the predictive model to decide what to say next, contextually. Rasa Core is one such Dialog Management system for NLG.

Recent research in NLG has uncovered Deep Learning algorithms. Especially Neural Dialog Generation Models such as Sequence to Sequence. It is more effective in predicting responses to natural language conversations. This would tremendously improve the comprehension abilities of machines and would also enable chatbots to handle question answering problems.

Looking into the future it seems certain the chatbots would truly develop intelligence. Comparable to humans and we would assess them using a Conversational Quotient (CQ).

An artificial intelligence system like a chatbot can automate a ton of processes. Register with Engati today and experience the magic of automation.